Yesterday my friend Heather showed me a beautiful hand stitched Christmas tree she had stitched to make into a pin cushion.  The idea came from Stitch Magazine.  I decided to use the same idea to create a few special Christmas cards.  They're quick to make and fit right in to my new personal goal of getting back to working on my art every day.  Instead of wasting time in front of the TV, I can accomplish something useful while watching/listening to TV.

The centre card was made using painted Aida cloth.  This is a great tip because you can use any acrylic paint and create Aida cloth in virtually any colour to suit your needs. 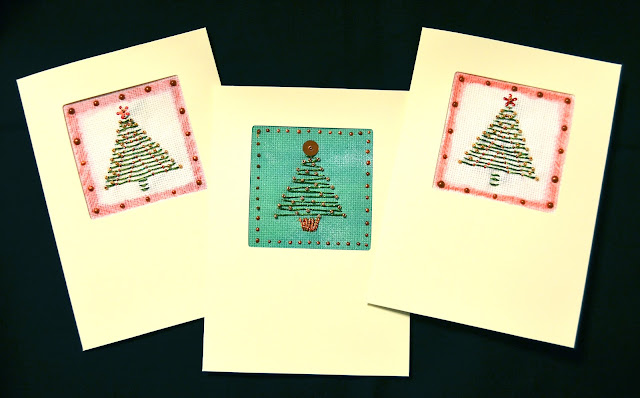 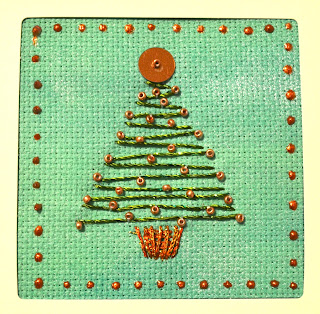 To Bead or Not To Bead - There Is No Question!

Sometimes it's all about the message!  I saw a plaque some time ago with this wonderful quote and I knew I had to do something with it.  I've been struggling a lot lately with who I am and what's going on in my life right now, but this message make me smiles.  Depression sucks. (There, I said it.) We've (I've) got to get over the ridiculous stigma and move on.
Anyway, I was inspired to pull out my beads [thanks to Anne Marie D :o)] and try to put some colour and bling into my days.  Anne Marie has also got me inspired to joint the Bead Journal Project 2012.
This piece is the result of hours of time wasted in front of the TV while watching too many episodes of Property Virgins, Income Property, House Hunters International and the likes.  The good thing is that you can't snack mindlessly while beading (although I do manage to get in some leftover Halloween Smarties).
Posted by Linda Kittmer at 6:44 PM 2 comments:

I just read Kim Klassen's most recent post and it inspired me to share this story.  I don't know who the original author is (it came to me as an email forward about a year ago) but it is a very inspiring story of how our life's struggles and challenges help to make us who we are.  As I continue to work through some challenges of my own, Kim's story reminded me that we are not alone and that we can take some comfort in knowing that others do understand because they too have been there!

The Tea Cup
While visiting an antique shop, a woman spotted an exceptionally beautiful cup, she picked it up, while commenting on it’s beauty.  Suddenly the teacup spoke, "You don't understand. I have not always been a teacup. I was once just a lump of clay. My master took me and rolled me, pounded and patted me while I complained, "Don't, I don't like it! Leave me alone," but he only smiled, and gently said, "Not yet!"
Then WHAM! I was placed on a spinning wheel and spun around and around. "Stop it! I'm getting dizzy!  I'm going to be sick!," I screamed. But the master only nodded and said quietly.  'Not yet.'
He spun me, poked and prodded, and bent me out of shape and then he put me in the oven. I never felt such heat.  I yelled, knocking and pounding at the door. "Help! Get me out of here!" I could see him through the opening and I could read his lips as he shook his head from side to side, 'Not yet'.
When I thought I couldn't bear it another minute, the door opened. He carefully took me out and put me on a shelf where I began to cool. It felt so good! But after I cooled he picked me up again and painted me all over. The fumes were horrible. I thought I would gag. "Oh, please, stop it, stop!" I cried. He only shook his head and said. 'Not yet!'.
Then suddenly he put me in another oven.  This one was twice as hot and I just knew I would suffocate. I begged. I pleaded. I screamed. I cried. I was convinced I would never make it. I was ready to give up, but just then the door opened and he took me out and again placed me on a shelf where I cooled and waited, wondering "What's he going to do to me next?"
An hour later he handed me a mirror and said 'Look at yourself.' And I did.  "That's not me; that couldn't be me. It's beautiful. I'm beautiful!!!"
Quietly he spoke: 'I want you to remember.' he said, 'I know it hurt to be rolled, pounded and patted, but had I left you alone, you'd have dried up. I know it made you dizzy to spin around on the wheel, but if I had stopped, you would have crumbled. I know it hurt and it was hot and disagreeable in the oven, but if I hadn't put you there, you would have cracked. I know the fumes were bad when I painted you, but if I hadn't done that, you never would have hardened. You would not have had any color in your life. If I hadn't put you in that second oven, you wouldn't have survived for long because the hardness would not have held. Now you are a finished product. Now you are what I had in mind when I first began with you.'
The moral of this story:
God has a plan for each of us. He is the potter, and we are His clay. He will mold us and expose us to just enough pressures of just the right kinds that we may be made into a flawless piece of work to fulfill His vision for us.
So when life seems hard, and you are being pounded, patted and pushed almost beyond endurance; when your world seems to be spinning out of control; when you feel like you are in a fiery furnace of trials; when life seems to "stink", try this:
Brew a cup of your favorite tea in your prettiest tea cup, sit down and think about this story and then, have a little talk with the Potter.

A few months ago I made some wonderful handmade papers.  I've been hanging on to them because they were too special to use for just anything.  Well, at some point you just have to get on with it and use your 'special stuff'.  There's no point hanging on to those little treasures forever, so I decided today was the day to start using them.

As you may have read in a previous post, I make all my own greeting cards so I started playing with some simple machine stitch in the handmade paper and I'm really please with the results.  The paper stitches beautifully and I love the simplicity of the cards.  Fortunately the cards only need small pieces so I have enough left to make many more greeting cards in the future. 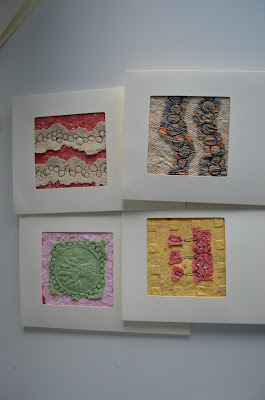 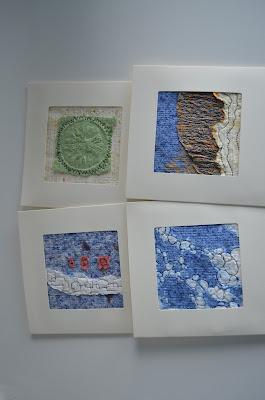 A little over a year ago I decided to make a better effort to remember the birthdays of family and friends with an old fashioned card in the mail.  I used to be terrible about staying on top of this, but thanks to the calendar on my Mac (and now my iPhone) and a system I've established to write and organize cards once each month for the upcoming dates, I'm managing to send cards out to everyone (and even on time!).

The second commitment I made to myself was to stop buying commercial greeting cards but rather to put a personal touch on my greetings by making my own cards.  This latest batch uses trifold card blanks (from a Canadian company http://www.cardblanks.com in Victoria, BC - they will ship to the US too) which allow me to put a little piece of my own art into the 'window' in the front of the card.  Here are some examples of cards I made using some of the fabric I've designed while playing with acrylic paint, stamps, etc. 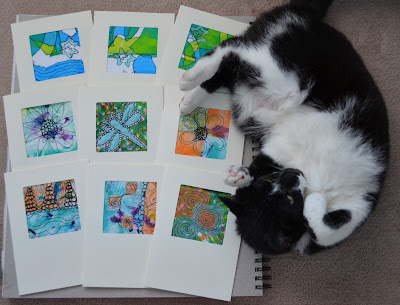 As you can see, my cat just couldn't miss the photo op. The poor neglected thing was a bit desperate for some attention!