A Little Bit of Baking... 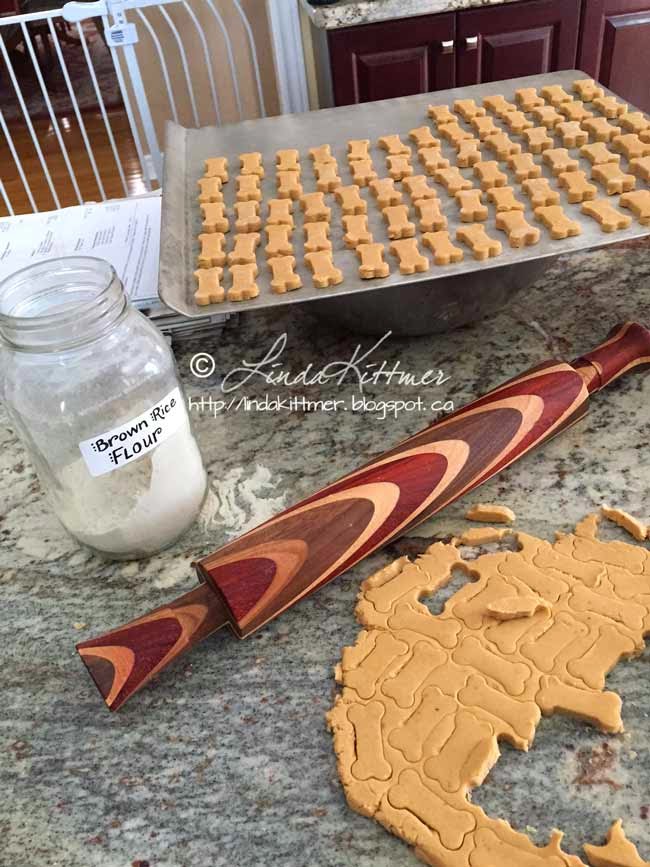 This week I came across a recipe for pumpkin puppy treats and since I had all the ingredients in my kitchen I decided I'd bake some healthy, all natural 'cookies' for Yoshi and Wafer. I can't believe the price of dog treats, especially the healthier 'natural' varieties, so discovering how easy these were to make was a great bonus and the puppies just love them! 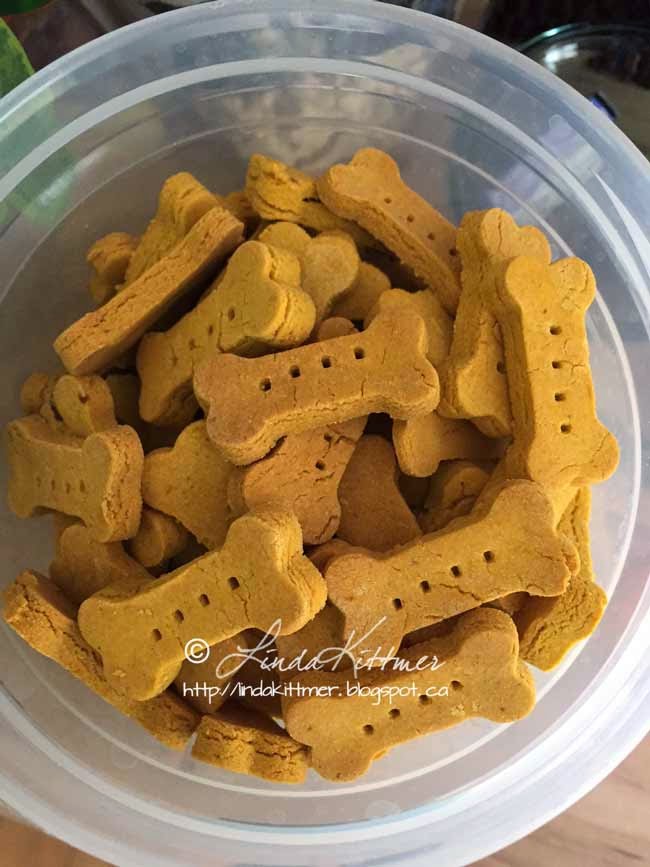 I found the recipe on Facebook. It had been shared from John Hammer's page by a friend. Here it is if you're interested in trying it.

Preheat oven to 350ºF
In large bowl, whisk together eggs and pumpkin until smooth. Stir in dry milk, salt and parsley. Add brown rice flour gradually, combining with your hands to form a stiff, dry dough. Turn out onto lightly floured surface (use brown rice flour) and if dough is still rough, briefly knead and press to combine.

Roll dough between 1/4 - 1/2" thick, depending on your preference and use cookie cutter to cut out bone shapes, gathering and re-rolling scraps as you go.

Place cookies on a cookie sheet (no greasing or paper is necessary). If desired, press a fork pattern on biscuits before baking.

Bake for 20 minutes, then remove from oven and carefully turn them over. Bake an additional 20 minutes on this side. Allow to cook completely before storing in an airtight container or letting your dog sample them.

*Brown rice flour gives the cookies a nice crunch and promotes better digestion, especially for dogs who do not tolerate wheat well.

Makes about 75 small biscuits or 50 medium biscuits. I ended up with about 120 using the little bone cookie cutter I have and these are a perfect size for training treats (broken in half for Wafer). 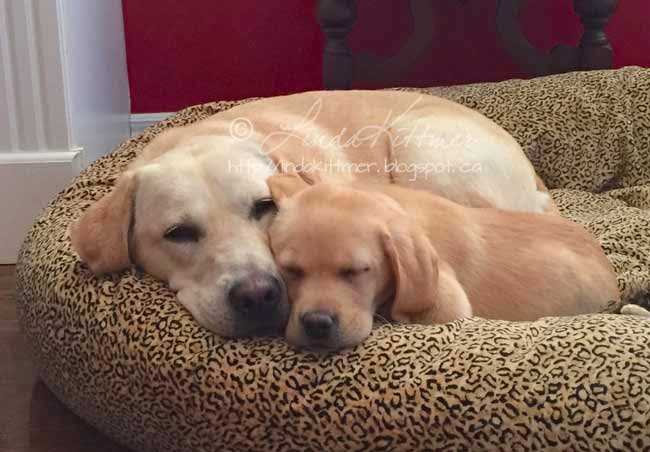 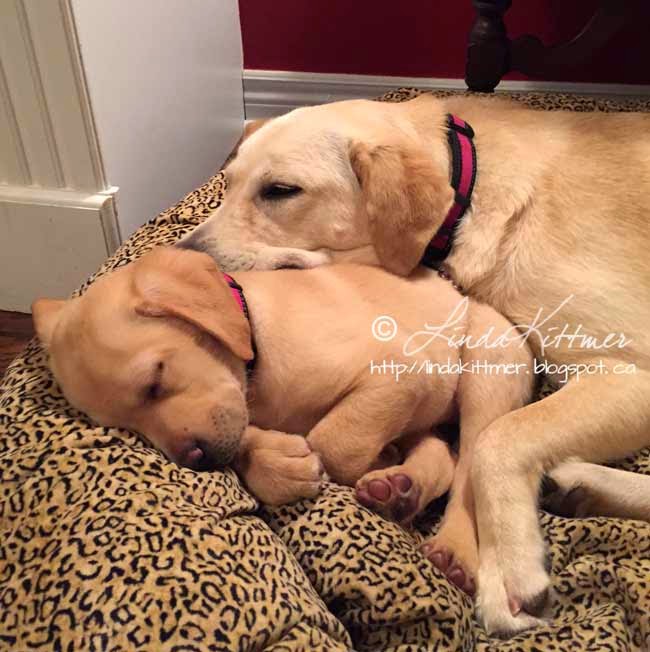 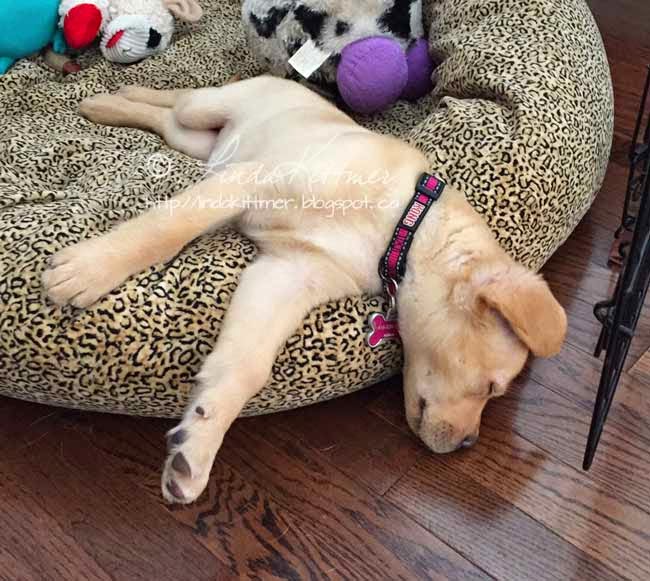 I love how the weekly prompts in DLP 2015 get me thinking outside of the box and trying new things while incorporating some old favourites that I haven't used for a while. 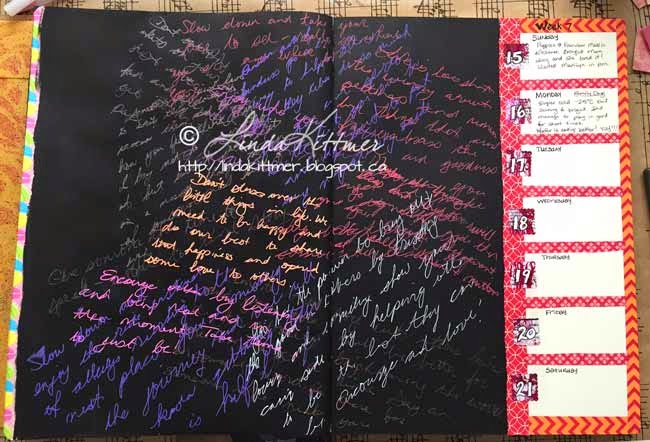 This weeks challenge was to 'cover up the good stuff' so I started by using Sakura Gelly Rollers to journal some thoughts in overlapping 'patches' of script on black gesso. 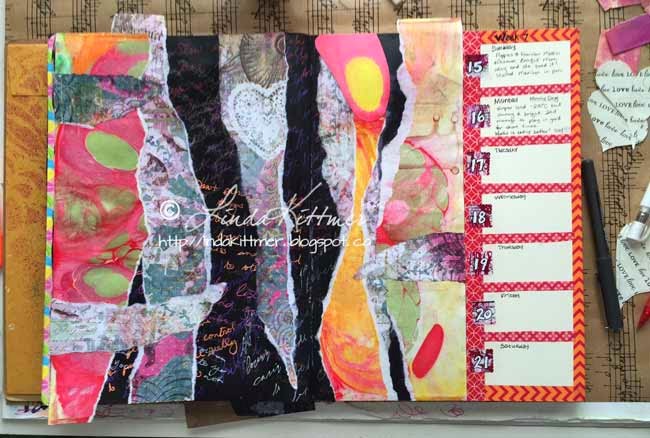 I then used some hand-marbled paper and a piece of scrapbook paper to tear strips to cover some of the journalling. 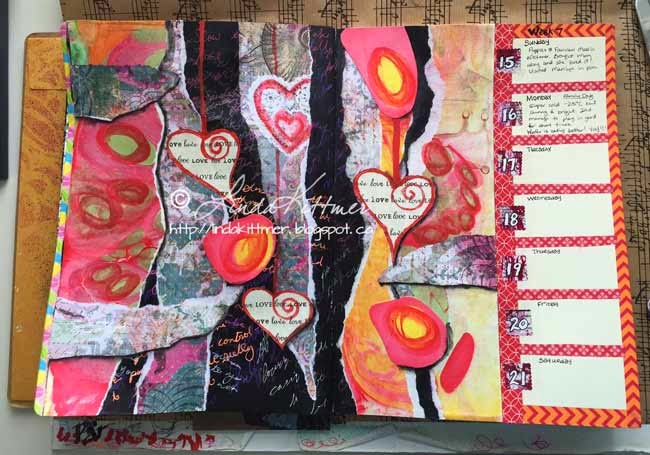 I cut some hearts out of the lining of an envelope that had the word love repeated in a variety of fonts. I drew in the lines suspending the 'love' hearts using a Liquitex paint marker and with a black water-soluble stabilo pencil, I added some shadows to give more of an illusion of depth and layers. A red Neocolour II crayon accented some of the circles on the marbled paper and the doily heart.

Finally I added a bit of doodling in black and white and called it done! 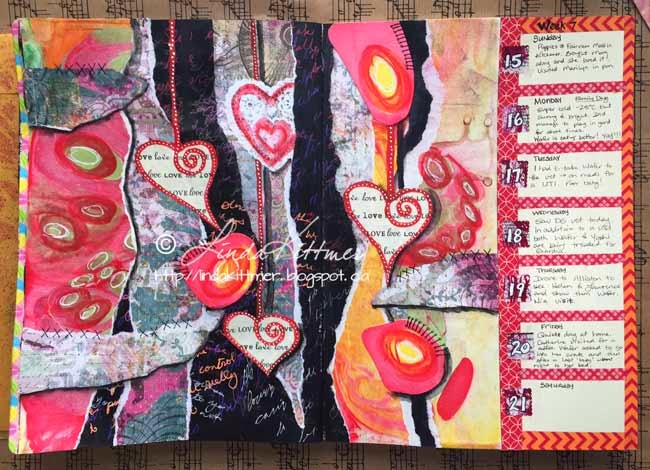 As most of you know, I foster future Dog Guide puppies for the Lion's Foundation of Canada Dog Guides. On February 10th we welcomed home our third foster puppy, Wafer. She is another yellow labrador retriever and she came home on her 7 week 'birthday'. We still have Yoshi, now 9 1/2 months old, and she will likely not be returning to Dog Guide 'University' for her formal training for another month or two. If you'd like to know more about Dog Guides or fostering a future Dog Guide, please click on the above link. Yoshi and Wafer are 2nd cousins. 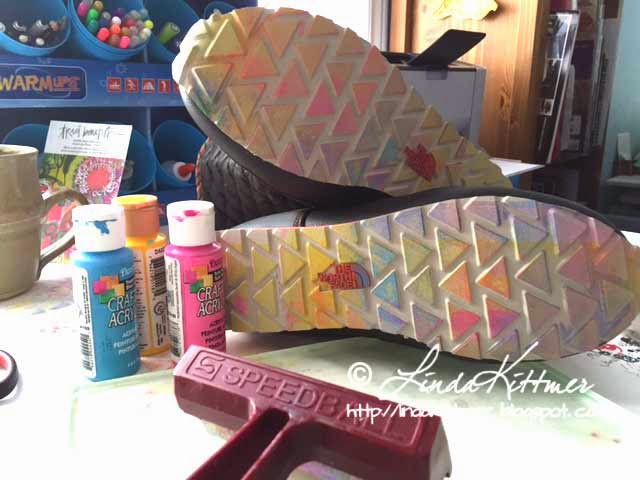 A walk in the backyard inspired the triangles in this week's spread. Don't you love the design on these boots? Sadly all of the paint has come off during subsequent walks in the snow. 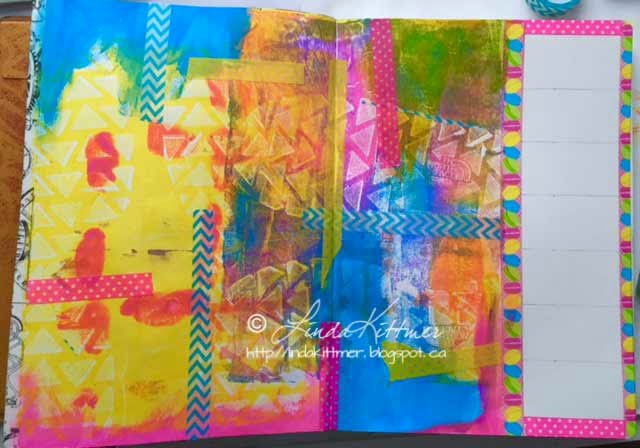 I started this spread with gelli prints using my boots. I highlighted some of the triangles by doodling over them with a black pen. 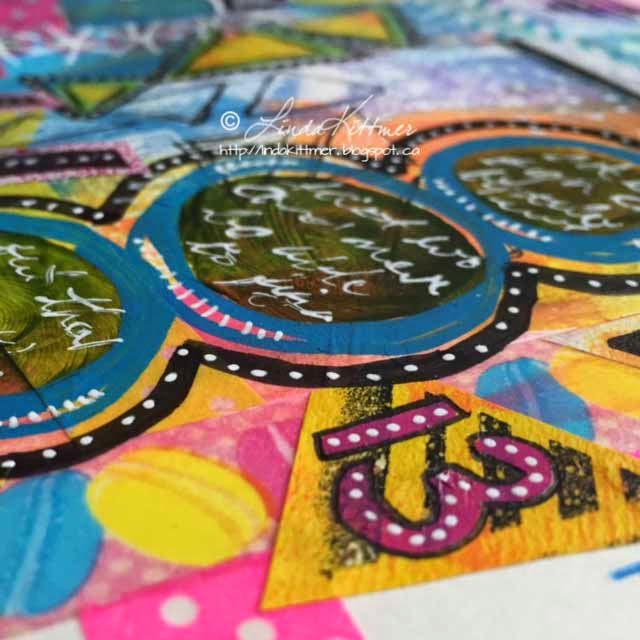 I also carved my own stamp to echo the triangles and I also used that stamp to create the 'stickers' for the numbered days in the calendar area of the spread. 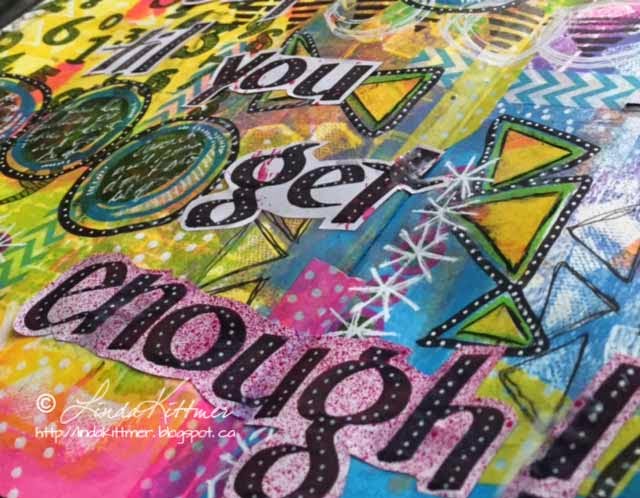 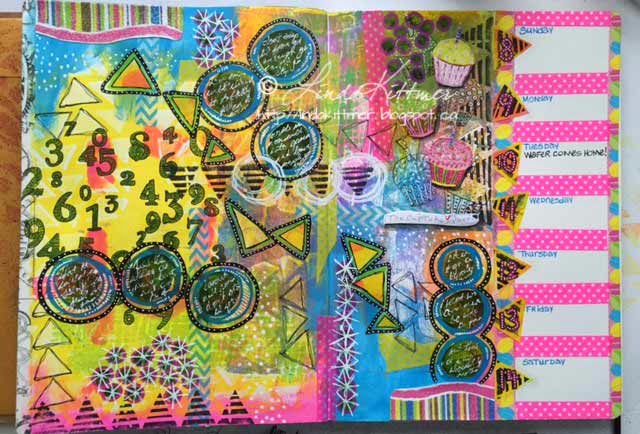 Some circles were added, in which I did some journalling using my white pen. Then, because of a Group of Eight challenge, in which I was to use numbers in my piece, I pulled out a number stencil and added some numbers to the area on the left.

You'll also notice a few cupcakes. They were on a birthday card that was sent to me by one of my sisters-in-law last month, and I thought it was a good way to keep a bit of the card and the 'cupcake queen' comment which made me smile. 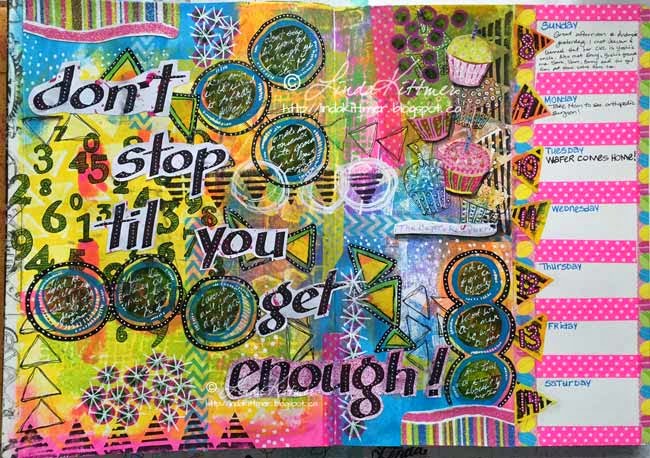 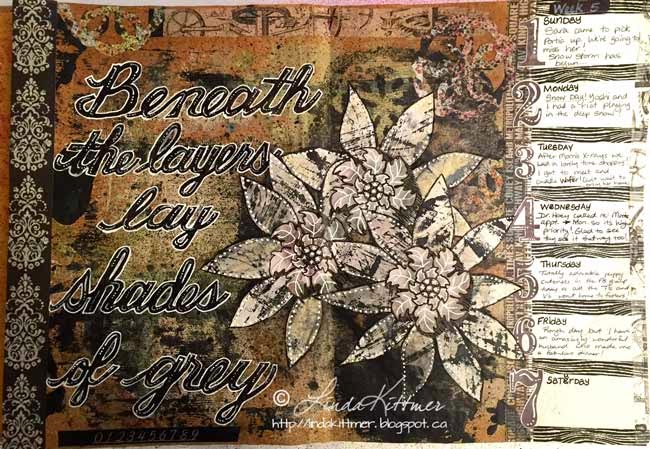 This week's DLP 2015 challenge was to use 'under paper', that wonderful paper you end up with while working on something else because you've splattered spray on it, cleaned you brushes and roller on it, etc.

I don't have any process pictures this week, partly because the process was much shorter. I loved the piece of under paper so I wanted to let it shine! The petals of the flowers were cut from another piece of under paper that complemented the colour scheme (or lack there of). A very simple collage, highlighted with a bit of white pen doodle and some lettering and I called it done!
Posted by Linda Kittmer at 8:26 AM 2 comments:

Email ThisBlogThis!Share to TwitterShare to FacebookShare to Pinterest
Links to this post
Labels: DLP, DLP2015, shades of grey, under paper

A Sneak Peek at a Challenge Quilt...

In case you thought I had given up totally on my sewing machine, I thought I'd give you a sneak peek at a piece I'm working on for our Group of Eight quarterly challenge. 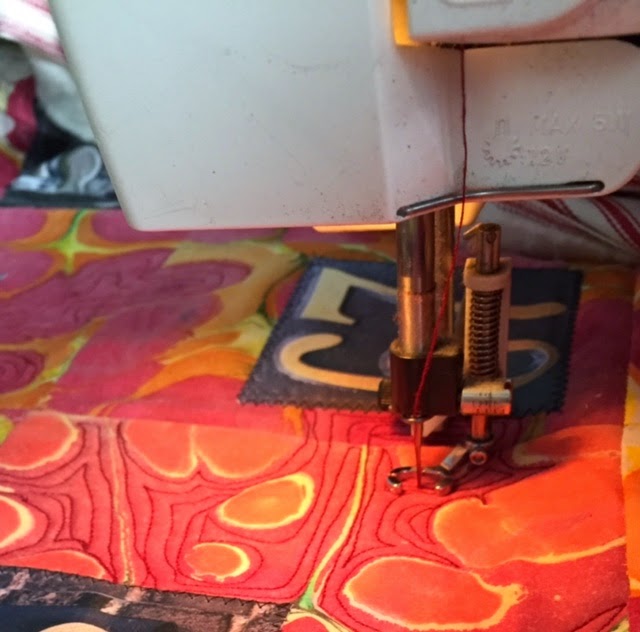 I'm using fabric that I had marbled about two years ago. You can see the posts about that here and here.

All going well, I'll have it done for our meeting Wednesday when we have our challenge reveal, and of course I'll post the finished images here too.

Wish me luck. There are still many hours of quilting left to be done!